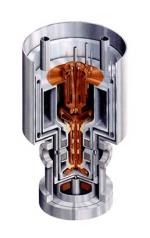 An EBIT is a device that makes and traps very highly charged ions by means of a high current density electron beam. The EBIT was developed at LLNL by Mort Levine and Ross Marrs. With this device, we perform a wide range of laboratory astrophysics and high accuracy atomic physics experiments. Using EBIT-I or SuperEBIT, we can produce all astrophysically relevant ions and ions of most high-Z material up to bare uranium (U92+) in the lab.

The operation of EBIT is based upon the Electron Beam Ion Source (EBIS), a design for an ion source intended for use in atomic physics and as an injector into heavy-ion accelerators. The EBIT is the only ion source in the world that can create highly charged ions that are practically at rest. All other sources of highly charged ions involve accelerators that accelerate the ions to very high energies. Therefore, EBIT allows us to study an otherwise inaccessible domain in which the potential energy of the ion is comparable to or exceeds its kinetic energy.

Experiments with highly charged ions are at the forefront of physics research in several areas today. These ions are used for studies in the areas of atomic, nuclear, plasma, astro, and surface physics. Following the LLNL EBIT-I and SuperEBIT, other EBITs have been built throughout the world. They can now be found in Oxford (England), Berlin, Heidelberg and Dresden (Germany), Tokyo (Japan), Shanghai (China), Belfast (Northern Ireland), Stockholm (Sweden), and Vancouver (Canada), and Gaithersburg, MD.

How does EBIT work?

EBIT consists of a high-current-density electron beam (up to 5000 A/cm2) passing through a series of three drift tubes. Ions are trapped radially by the charge of the electron beam itself, and axially by voltages applied to the end drift tubes.

The electron beam is magnetically compressed by a high magnetic field from a pair of superconducting Helmholtz coils. The electron beam energy in the trap is determined by the voltage applied to the central drift tube.

As electrons collide with the ions in the beam, they strip off electrons until the energy required to remove the next electron is higher than the beam energy. Our original EBIT is capable of an electron beam energy of about 30 keV, enough to make neon-like uranium (U82+, or a uranium atom with only 10 of the usual 92 electrons). We have built a high-energy EBIT, named Super-EBIT, with a floating electron gun, that can achieve an electron beam energy of 200 keV, enough to make bare uranium (U92+).